Congratulations to Daniel Steel, whose first article, ‘Genocide and the “clean-fighting Turk” in First World War Britain and Ireland’ has been published online in Historical Research.

Adapted from part of his UC MA thesis, ‘Iron Cross and Crescent: Press Discussion of the Ottoman Empire in the United Kingdom, 1914-1918’, Daniel’s article contends that, despite press awareness of the Armenian Genocide that was underway in the Ottoman Empire, press coverage of Turkish soldiers remained positive, based on the acceptance of UK soldiers’ correspondence and the desire to focus criticism on Britain’s main enemy, Germany.

Daniel is currently half-way through a year at the University of Oxford as the current holder of the Edward Gibbon Wakefield Scholarship, as part of his wider UC PhD project, ‘Fighting for Empire? Britain, New Zealand and the Middle East during the First World War’.

The article’s abstract is below:

British and Irish attitudes towards their Turkish enemy during the First World War have rarely been explored. Unlike the German ‘Hun’, Turks were praised as ‘clean fighters’, despite overwhelming evidence of the Armenian Genocide.

Using largely unexamined press material, this article attributes the ‘clean-fighting Turk’s’ longevity to the sanctity of soldier testimony, where it originated, and the preoccupation with Germany.

Both Turkish chivalry, which highlighted German ‘barbarity’ by contrast, and Germano-centric interpretations of the Armenian Genocide offered hitherto unrecognized validation of the United Kingdom’s ‘just war’ in Europe.

The First World War was truly global, but Germany dominated the public imagination. 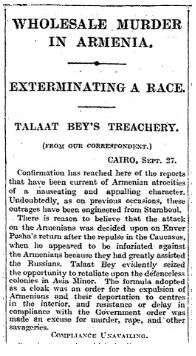